Excerpted from the Preface 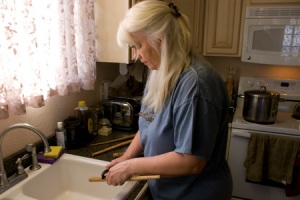 Light filtered through the kitchen window and onto the kitchen counter where I was working one bright, crisp morning in my Carolina mountain home. Cooking is one of my passions, and I was developing a new recipe. As I stood in the kitchen in front of the spice rack, looking for just the right hint of spice for my latest epicurean adventure, opening jars and smelling my way through the homegrown herbs, rosemary practically leapt off the shelf and into my hand. I removed the lid and with eyes closed deeply inhaled her warm and piney scent. “Perfect,” I thought. And then I heard a voice: “If rosemary has appeared in your cards today…” It dawned on me in that moment that I might be experiencing something similar to divining with herbs. I was intuitively “pulling”  the right herbs off the shelf as one might pull a card from an oracle deck. These herbs were literally talking to me! And so began Wisdom of the Plant Devas: Herbal Medicine for a New Earth. The messages that came through were ones that the devas had obviously been waiting to share. The copious writing that followed and the ensuing revelations became a catalyst for personal growth and change.

While I first heard the voice of an herb deva in my kitchen that morning, shortly thereafter, they appeared in my garden. Nearing the end of my fertile years and incredibly grateful for my partner and our committed relationship, I felt the impulse to offer some of the last of my menstrual blood, mixed with his semen, to a wild black raspberry bush that grew in our backyard next to the vegetable garden. My partner was receptive to the idea, but then he isn’t called the GreenMan for nothing! It had been my intention to give something sacred to me, to us, back to the earth. The devas were ecstatic. I had to rub my eyes in disbelief. These little luminous beings were jumping up and down with joy and were delighted that I had made this secret offering. (So much for secrets!) Then they sent me off running to my computer, so I could type the messages they were so insistent on delivering. Later, upon reading what I had written, I was astounded. I had no idea that such a simple act would bring such a powerful vision. They show up frequently now, when I am working in my garden, and more often than not I have to put everything aside and go promptly to my computer to deliver their timely message. The posts you will read on this blog are a continuation of that journey that began in my garden. May it be blessed.

Please tell me about your journeys with plants, devas and earth-spirit medicine. 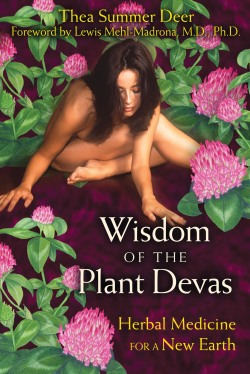